Georgian PM: We Participated in Shanghai Forum at the Invitation of President Xi 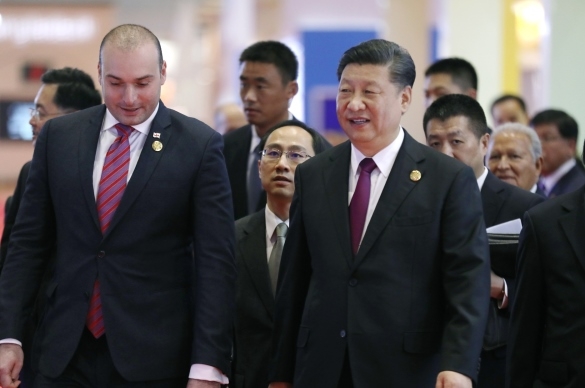 Georgian PM: We Participated in Shanghai Forum at the Invitation of President Xi

The Georgian Prime Minister assessed his recent working visit to China, adding that Georgia participated in the Shanghai Forum at the invitation of Chinese President Xi Jinping.

“It was officially stated that China intends to substantially increase imports from countries specifically invited to the Forum, and Georgia is among them. I thus wish to express my gratitude to President Xi Jinping and the Government of China. We have a unique advantage as Georgia is the only country in the region which has a Free Trade Regime with China,” said Prime Minister Mamuka Bakhtadze.

Bakhtadze noted that it was a unique opportunity and a historic chance for thr country to boost exports to China.

“The weakest point of our economy is the current account deficit, which is caused by the need to import more commodities than export. Hence, it is vital to increase our export potential. It is directly linked with the main economic challenge to eradicate poverty. Therefore, we are leaving with a very specific plan and believe that within the next 2 years we will manage to significantly increase our export potential. Our task will be to at least double exports from Georgia to China,” he added.

More than 50 Georgian companies are being showcased at the China International Import Expo in Shanghai.

The opening ceremony, hosted by President Xi Jinping, was also attended by the Georgian Prime Minister. Bakhtadze, together with the Chinese President and the heads of delegations from the exposition’s participating countries, visited the exhibition space.

The PM visited the Georgian Pavilion at the International Expo, where the Produce in Georgia Agency, the Innovation and Technology Agency, the National Tourism Administration, the Mountain Resorts Development Company, the National Wine Agency, and Georgian Railway are featured alongside Georgian private companies to introduce visitors to Georgia’s business environment, the country’s investment potential and programs to support business, and to the country’s innovative reforms.