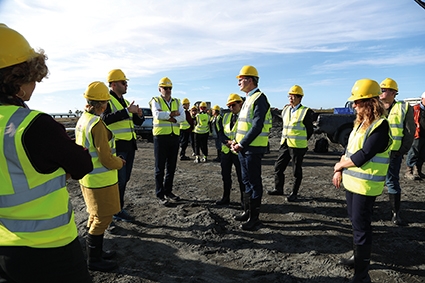 On October 30, the representatives of the diplomatic corps of different countries visited the ongoing works at Anaklia Port.

Mamuka Khazaradze, the founder of the project, and the port managers hosted the ambassadors at Anaklia Port. After visiting the construction works and the cutter-suction dredger ship, the Athena, Anaklia Port managers introduced the project implementation process and future plans to the representatives of diplomatic corps.

“This is my first visit to Anaklia and I’m happy to get detailed information about this unique and important project for Georgia,” said Japan’s Ambassador Extraordinary and Plenipotentiary to Georgia, Tadaharu Uehara. “The Anaklia Deep Sea Port is important not only for Georgia but also for the international community, including Japan. I believe that the trade relations between us will be deepened and Japan will be more actively involved in this project.”

“I am visiting the area of Anaklia Port for the fifth time and the progress of construction works is very impressive,” noted Ambassador of the Kingdom of Netherlands to Georgia, Johannes Douma. “I feel proud because this ship (Van Oord’s cutter suction dredger ship, the Athena) belongs to us. I’m glad we can take part in the development of Georgia’s economy. I hope that more countries will get involved in this process. In future, our country also stands to benefit from Anaklia Port – we have the largest port and we will be worthy competitors. Additionally, we will work together for logistics development.”

“I’m happy to be here today and visit the construction works of Anaklia Port for the second time,” said Romanian Ambassador to Georgia, Radu Liviu Horumba. “The process of its development, the technologies used for it and the concept of the project are quite interesting. I’m glad that Georgia’s first deep sea port will start operating in a few years.”

The marine works of Anaklia Port are being carried out continuously 24/7. One of the world’s largest dredging vessels, Athena, has dredged about 4 million m3 of sand from the Anaklia Deep Sea Port. In the current works, along with the specialists of the leading Dutch company Van Oord, the local population is also involved.

Alongside dredging and reclamation works, the installation of modern standards, the latest technology drainage systems with a total length of 2436510 meters provided by Van Oord, is also almost complete.

The large-scale marine works of Anaklia Deep Sea Port launched on September 16. The opening of the first phase of the port and the start of receiving the ships is planned from the end of 2020.