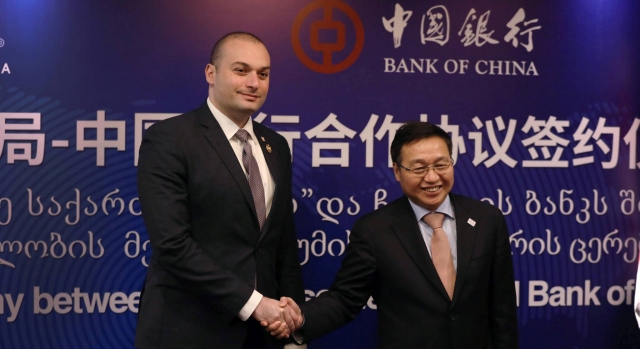 On November 4 the Prime Minister of Georgia, Mamuka Bakhtadze started his working visit to China with a meeting with the Chair of the Bank of China Group, Chen Siqing.

The sides discussed the trade and economic relations between Georgia and China, which have further developed thanks to the recent free trade agreement signed by the two countries.

Georgia is the first country in the region to have signed an FTA with both China and the European Union, which provides Georgian companies, along with businesspersons interested in investing in Georgia, with access to a multimillion market.

The sides also talked about the existing potential in bilateral financial cooperation and the importance of effectively tapping into it.

The Georgian PM’s Press Office reports that following the meeting between the Prime Minister of Georgia and the Chairman of the Bank of China Group, the Produce in Georgia Agency and the Bank of China signed a memorandum of cooperation.

The document was signed by the Agency’s Director Mikheil Khidureli and representatives of the Bank of China, seeking to promote the further enhancement of cooperation between Georgian and Chinese SMEs and to foster the exchange of information and experience in adopting new technologies.